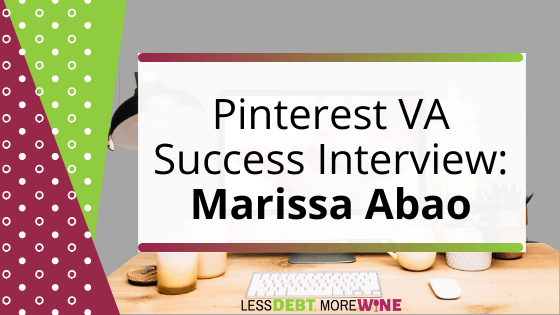 This post contains affiliate links meaning if you click and make a purchase I will receive a small commission at no cost to you. Please see my disclosure for more information.

Hey! I was thrilled to get to talk to Marissa of marissaabao.com/ about what it’s like to be a Pinterest Virtual Assistant! Below you’ll find links to resources mentioned as well as the transcript to the video, enjoy!

Liz: 00:01 All right guys. I have Marissa from Marissaabao.com here. I’m so excited she could join me. She’s a fellow Pinterest virtual assistant. Thank you again for, for agreeing to do this quick call. Um, so tell me just a little bit about kind of how you stumbled into the world of being a Pinterest virtual assistant. Cause I feel like it’s not a well known thing.

Marissa: 00:25 All right. Thank you for this opportunity Liz. Well, um, I started working as a Pinterest VA when I got my first client for my virtual assistant business. She hired me as her social media virtual assistant and introduced me to Pinterest and Tailwind and how to use it to drive traffic to her website. And then it was overwhelming at first because yes, she has a lot of Pinterest pins and has been working on her Pinterest account for quite some time. And, but then I realized that it is that their biggest source of traffic to her website. Then, um, I got interested and excited about the, about pursuing learning more about the Pinterest and Tailwind because it is, um, the two of them are a good combination. Pinterest is, um, it’s a visual based platform and Tailwind. I love tailwind because of that,

Liz: 01:41 but I love, I love that you kind of started out as a general virtual assistant. Yes. Zeroed in on Pinterest based on your experience, which is really cool because you realized what a like necessary service it is, right? Yeah.

Marissa: 01:57 Yes. It’s um, and Tailwind is a very good app. I love their customer support. Um, I’ve encountered a lot of concerns that I don’t know, like especially when a was starting out and they’ve been really, um, patient and helpful in helping me to understand things. Um, it is a software, it has a lot of things going on, features and they update their app every year.

Liz: 02:37 then it’s like a great tool for PVAs to use. So you decided to kind of zero in on Pinterest and then you ended up taking, I think you also took the Become VA Pinterest Today course. Correct, yes. I find that course. And sort of what, what did you think of the course itself?

Marissa: 02:57 Oh, well I um, I found about the course when I was searching for um, how to learn more about Pinterest. Um, there was also another course that, um, started in 2017. It was by Melyssa Griffin, but then it was not geared towards virtual assistants.

Liz: 03:24 Yeah. It wasn’t geared towards like offering this as a service. Like there’s so many courses on Pinterest. Yes. This is the only one I found that really helps you figure out how to do it as a service, like pricing and administrative stuff and like onboarding, cause I’ve taken other Pinterest courses too and they’re great, but it doesn’t… Like there’s so many. I was like, wait, what do I charge? What do I need to ask for the client to make sure I have everything to get going? I felt like this course just helped me figure that out.

Marissa: 03:51 Yes, exactly. And that’s why I chose how to “Become Pinterest VA Today” because it is for us, for virtual assistants and it’s basically our voice in that Pinterest VA community. And it’s not, I haven’t, um, encountered any other online course aside from this one. So it stood out. So I think this one, and I’m very glad because, uh, Kristin and Gina have been updating the course as well.

Marissa: 04:31 Yes, and I love that they’ve also, uh, years ago, like in 2017, I was not very serious about this course. It’s just to get like, um, just to familiar familiarize, but I was not very serious about it. And then I from time to time I went there and it, they added so much like Tailwind training tech training. So it is a really good course. It has a good value and I think, um, it don’t go in the future.

Liz: 05:11 Oh, totally. So I know you said you kind of like you, you didn’t take the course super seriously at first, so once you started taking it seriously and like looking for more clients, whether they were one-off services or monthly ones, how long did it take you to earn back your investment in the course?

Marissa: 05:38 Yes. I was a general, a virtual assistant. I was offering other services as well, like website management, um, research and so on. So when I started focusing on Pinterest, I I got more clients within like six months. Yeah. So I’m happy that it, it has to been working out so well and people are becoming more and more interested about Pinterest and how, how it will help their business.

Liz: 06:14 yeah. Because it is such a huge platform and it’s just growing, it went public this year. So, yeah. So just, you know, quickly kind of what’s your favorite part of being a Pinterest virtual assistant and sort of what’s, what do you find the toughest part of the job? Cause it is a job. It’s an awesome job, but it is a job.

Marissa: 06:36 The um, the best part is when I use Tailwind because I get to automate everything. Uh, I use a smartloop, interval scheduling feature. I use board list and it’s just, it’s just perfect. I do in a manually from time to time because especially if it’s just a new Pinterest board, you just have to, add pins to that new board so that….because I think Pinterest doesn’t like empty boards.

Liz: 07:19 Oh yeah, yeah. No, whenever a new board I started, but like the flexibility of being able to work whenever I want, like, because I can schedule things with Tailwind or you know, like in the travel, like I went on vacation the other week and like totally different time zone. It didn’t matter. I was just able to like schedule things ahead. Like I just, I love the flexibility of it. Um, so what would you say is the toughest part of being a PVA?

Marissa: 07:43 The toughest part is not being able to meet the client’s expectations and that, um, that makes me sad as a Pinterest VA, I want to do my best. I want to exceed their expectations and give them all the suggestions. If that would be a really good to grow their Pinterest account. But then at the end of the day, I could only do my best. And if a client, um,

Liz: 08:20 it’s one of these, it’s almost like just setting expectations from the start, because I’ve had clients, I told them, I’m like, look, it’s a search engine, like Pinterest isn’t social media, it takes a bare minimum of three months to really start to see some, some growth. And like, so I had a client earlier this year, after two months. So like we’re going to stop because we’re not really seeing. I was like, well, I told you it takes three years, three months, not three years, three months, you know. Um, but I was like, I totally understand, you know, but I was like, I don’t think I failed expectations. I feel like you didn’t, you didn’t, weren’t hearing me when I was setting your expectations. So,

Marissa: 08:55 yeah. Yes. That’s really good. And well, yeah, at the end of the day, I’m happy, um, that I always do my best with their accounts and, but you know, if things is not, if things are not going their way, then you know, ,

Liz: 09:18 move on to different clients. But yeah. But it’s also understanding that Pinterest is, it’s hard to compare month over month because there’s different amount of users in the summer versus holidays. You have to look at year over year and explaining that to clients can be, can be tough sometimes when they don’t understand the platform like we do. Um, so just last thing. What would you say to someone thinking of becoming a Pinterest virtual assistant and possibly entertain the idea of taking the same course we took? What would you tell them?

Marissa: 09:49 The patient, um, and pursue learning about Pinterest and Tailwind every day if they have a lot of um, blog post, especially a Tailwind they have Facebook lives from time to time. It’s just last week I watch their video by Ellison Meredith and Jeff [inaudible]. It was about 8 things that you should stop doing unfinished trust. And I learned a lot. It was a very fun, um, Facebook live and there was was a things I’ve been doing as well. Like, like using Pinterest board covers and they said, stop doing that. So anyway, um, if you’re interested, if someone is interested in becoming a Pinterest VA, be patient and

Liz: 10:46 start absorbing information and if you do end up taking Gina and Kristin’s course, which I think you and I would both recommend because of the unique perspective it offers, they keep a group, The Pinterest Post, which is also a great place to learn and ask other PVAs like, hey guys, I’m seeing this. Is it just me? Like I’ve definitely gone in with questions when I’m like, wait a second, you know, and they, you know, the whole community and Gina and Kristin are great in answering them.

Marissa: 11:12 Yes. And sometimes, um, I have a tendency to forget things because of too much information and one of them, the things that I w I would recommend as well as to connect with a fellow Pinterest VAs because they are the ones who would be able to understand you and communicate to you better, better than other virtual assistants. Because we are in a different world.

Liz: 11:41 Yeah. Because we’re dealing with a visual search engine. We’re not, the only social media are not doing, we’re not emailing, you know, so we’re not talking to graphics and searches and stuff and have, you know, hashtags and Pinterest is totally different than hashtags and Instagram. Yes. No, that’s an awesome piece of advice. Thank you so much again for joining me and just kind of sharing your experience. Uh, is there any final words you want to say?

Marissa: 12:04 Oh, thank you so much for this opportunity. I’m glad that you posted it and, um, I’ve, I’ve seen you in The Pinterest Post community and I think that you’ve been helping other, other Pinterest VAs as well, so thank you. And looking forward for this collaboration.

Liz: 12:27 Yeah, for sure guys, you can check out her site in the link below this video, um, so that you can kind of learn more, especially if you need a new Pinterest virtual assistant. Um, I’m not taking clients right now, so thank you again and, uh, everyone, you know, I hope you enjoyed this video.

22shares
This site uses cookies. Some of these cookies are essential, while others help us to improve your experience by providing insights into how the site is being used. For more detailed information on the cookies we use, please check our Privacy Policy.OkPrivacy policy