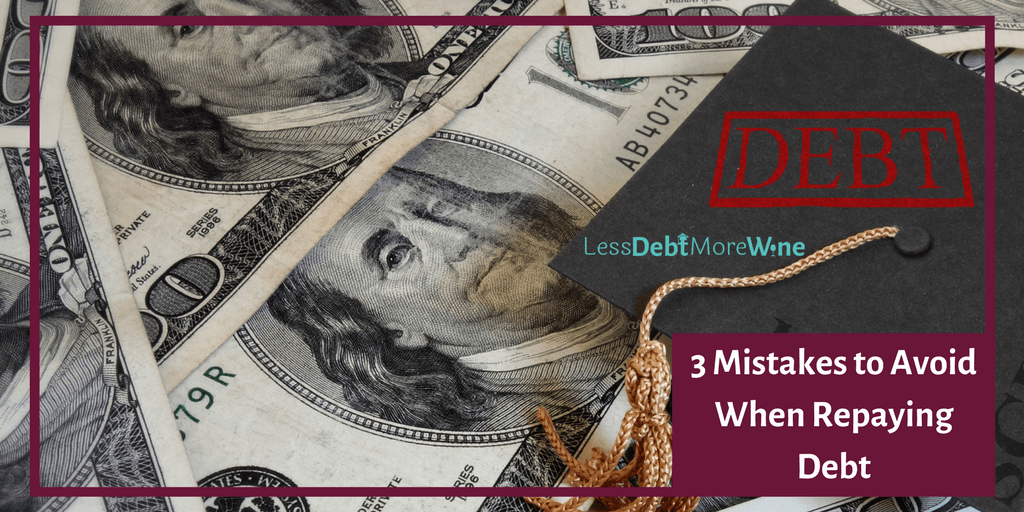 If you’re making repaying debt and student loan debt, in particular, a priority, awesome. Way to go you. Do yourself a favor and make sure you aren’t taking a step backward with every two steps forward. Avoid these mistakes:

It took a while after I’d paid off all my credit card debt before I could use them in my budget. Now that I’ve gotten control on my spending I use credit cards to build up travel rewards points.

How’d I do it? I got really good at budgeting, and for a while, the only credit card I carried around was wrapped in paper and tape and said, “Emergencies Only.”

Once I got used to staying in budget, I just switched from using a debit card to using my credit card. It’s not to say I don’t go over budget every now and then; I am only human, but it’s not by too much.

Don’t Take on a Car Loan

This is definitely one of those do as I say, not as I do situations. When my car got totaled in March of 2013, I got around $7k from my insurance. Did I just go and buy a perfectly fine used car using that money? Nope, I got a brand new car and a $16k car loan to along with it. I had no clue what I was doing. Were I in the same position now, I’d do my research and get a car that wouldn’t require me to take out a loan.

So please, please do as I say and not as I did. Do whatever you can to avoid taking on a car loan when you are repaying student loan debt. Not super car savvy? That is what the internet is for, there are tons of posts on shopping for used cars, even for those that have no clue what they are doing.

2. Making Payments Only Once a Month

Yes, you have to make payments every month, but you don’t have to make only one payment per month. Splitting your payment with make each payment go a bit further.

Keep your coffee habit, and just split your payment each month when repaying debt.

If You Can, Make Extra Payments

The more you put towards your debt each month, the less interest you’ll pay. Not only do I split my monthly payment to save on interest, I also make an extra payment. One way I’m making extra debt payments is with Qoins. Qoins will help you pay down debt faster by applying an extra payment for you using your spare change. ​

3. Not Prioritizing Your Debt

A lot of people and I’m guilty of having done this as well, will make debt a priority in their mind, but not in their actions. I would think about my debt a lot but it wasn’t the first thing I would do with my money. The first thing you do with your money when you get it, that is your priority. And if you aren’t repaying debt first thing, then it’s not a priority.

I would tell myself I was just waiting to make a big payment. Ultimately that money (usually extra side hustle money) would get spent on something else that had come up. I have always been most successful at paying off debt when I made it the first thing I did with my money.

When I got paid, I’d create my budget for the month and I would know how much was going towards debt. I would then make all of my budgeted debt payments before I did anything else. Make sure you aren’t just saying debt is a priority and that you are actually taking action too.

Don’t make your journey to debt freedom harder than it has to be. Avoid taking on any more debt when you are trying to pay the debt off. The two steps forward one step back, maybe some kind of cha-cha, but no one wants to dance with debt.

Any other mistakes to avoid when paying off debt? Let me know in the comments!

8 thoughts on “3 Mistakes to Avoid When Repaying Debt”

568
This site uses cookies. Some of these cookies are essential, while others help us to improve your experience by providing insights into how the site is being used. For more detailed information on the cookies we use, please check our Privacy Policy.OkPrivacy policy