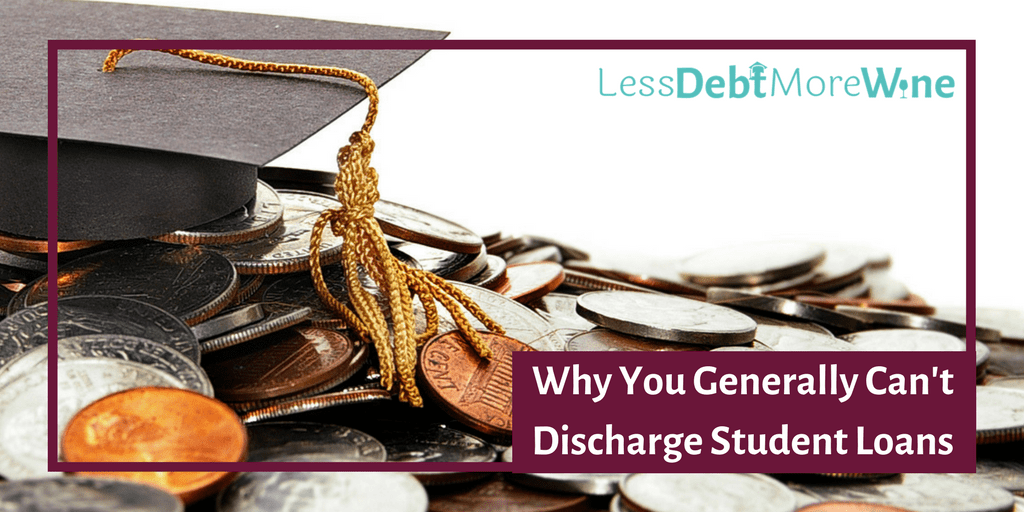 If there is one thing you know about your student loans it is probably that you can’t just get rid of them in bankruptcy. It has been widely spread that it is very difficult to discharge student loans, but do you know why?

Looking at the actual code section addressing student loans, it states that “undue hardship” is the only instance where student loans might be able to be discharged. It reads:

(8)unless excepting such debt from discharge under this paragraph would impose an undue hardship on the debtor and the debtor’s dependents, for—

(B)any other educational loan that is a qualified education loan, as defined in section 221(d)(1) of the Internal Revenue Code of 1986, incurred by a debtor who is an individual;

Unfortunately, the code does not define what constitutes “undue hardship” so it has been left up to the courts. There are two prevailing tests, different courts may rely on either depending on where they are located.

The Test for Determining “Undue Hardship”

Some (not all courts) have adopted what is called the Brunner test (from Brunner v NY State Higher Education Serv. Corp) for determining “undue hardship” The test:

“(1) the debtor[s] cannot maintain, based on current income and expenses, a ‘minimal’ standard of living for [themselves and dependents] if forced to repay the loans;

(2) that additional circumstances exist indicating that this state of affairs is likely to persist for a significant portion of the repayment period of the student loans; and

(3) that the debtor[s have] made good faith efforts to repay the loans.”

“(1) the debtor’s past, present and reasonably reliable future financial resources;

(2) a calculation of the reasonable living expenses of the debtor and her dependents; and

(3) any other relevant facts and circumstances.”

These can both be difficult tests to pass, which is why the general rule of being unable to discharge your student loans is so well known.

What About All the Lawsuits in the News

There have been more and more instances of people with student loan debt suing their schools to discharge their debt. These cases haven’t been pursuing the ability to discharge their loans through bankruptcy but rather on claims of fraud committed by the school.

Thus far there has really only been one instance of success in the case of Corinthian College a for-profit college. Corinthian ended up closing, the result of which was the government coming up with a process for students who have been defrauded by their colleges to have their loans forgiven.

Personally, I think this should lead to (though has yet to be seen) more oversight in the cost of attending college. The schools have been largely left unchecked in raising tuition rates exponentially, relying on federal funding of student loans.

Hopefully, we will see reform not only in student loan repayment (hello refinancing) but also in the disbursement of loans as well.

Any Other Way I Can Get Rid of My Loans

While there is some loan forgiveness in various flexible repayment programs (income based repayment for example), none of these programs have been around long enough to see what that would look like at the end of the repayment schedule. As it stands now, the forgiven amount in those flexible repayment plans would be considered taxable income.

If you have federal student loans and are struggling with your payments, consider utilizing an income-driven repayment plan at least temporarily.

If you have private loans or your debt to income ratio allows, consider refinancing with a company like SoFi. I wrote a review about my experience refinancing my bar loan with SoFi. Refinancing with SoFi ended up saving me over $1k. Use one of my links to refinance and you’ll get a $100 bonus.

Any questions about why you generally can’t discharge student loans? Let me know in the comments!

85shares
This site uses cookies. Some of these cookies are essential, while others help us to improve your experience by providing insights into how the site is being used. For more detailed information on the cookies we use, please check our Privacy Policy.OkPrivacy policy