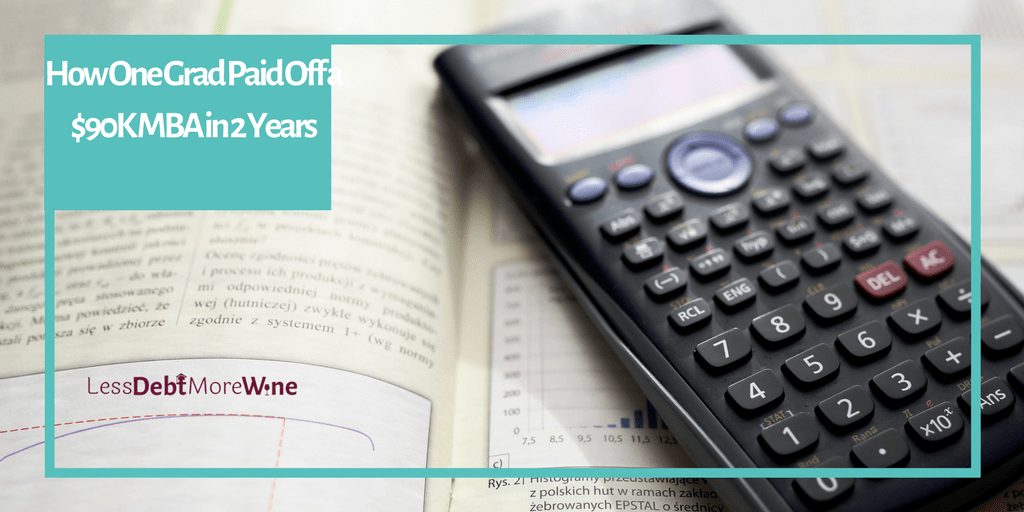 This is a guest post from Eric Rosenberg at Personal Profitability. He paid off $40,000 of student loan debt from his $90k MBA in two years and quit his day job in April 2016 to pursue his online side hustle full-time.

On March 23, 2012, I made a $3,690.52 student loan payment. That was the very last student loan payment I made on my MBA. However, I hadn’t been paying all that long in the scheme of things. In fact, I had only graduated two years ago. Well, two years and six days to be precise. Here’s the story of how I ended up with $40,000 in student loans and how I was able to pay everything off in two years.

I graduated from the University of Denver in 2010, the proud owner of a shiny new Masters in Business Administration. Getting to that point took a combination of hard work and an estimated $90,000 cost of attendance.

About $67,000 of that was tuition. When I started graduate school, I didn’t have an extra $90,000 lying around. In the application process, like with most other college students, I filled out the Free Application for Federal Student Aid, or FAFSA, forms which offered me about $40,000 in Stafford Loans.

I was working full-time as a financial analyst at the time and intended to keep my job while going to school. Not living with my parents and supporting myself with my own job, I qualified for quite a bit of student loans. However, there were not many scholarship options available for my MBA program.

I received a few thousand dollars, but the rest fell on my shoulders. Each quarter (DU is on the quarter system, not the semester system), I paid a portion of my tuition from savings, a portion from earnings at my job, and a portion with my student loans.

I didn’t realize it at the time but making those small payments while in school started some very good habits. Making optional payments each month, I was getting in the habit of making student loan payments on a regular schedule.

I needed to save as much as I could for future tuition, fees, books, housing, and eating, so I wasn’t paying as much as I hypothetically could from each paycheck, but I was in the habit of living on a college kid budget and making student loan payments while receiving a full-time income. Making a dent on my student loan balance while still in school helped put me in a position to get out of debt very quickly after graduation.

Live on a College Budget

As a young professional pulling in a good income, I had the money for a swanky downtown apartment near my office or an upscale rental near the school without any roommates. That would have set me back well over $1,500 per month, and my hard earned money had a more important job than going to an expensive apartment.

Instead, I found friends living near campus in an old house that we split. With $400 per month rent and modest utilities, I was left with a big chunk of cash in my checking account even after paying living and school expenses. I also saved a lot on gas, car maintenance, and downtown parking by taking the light rail or biking to work instead of driving. I had a free pass for public transportation from school, and I saved a lot of money putting it to good use.

Find a Payment Schedule that Works

Most people pay their student loans once per month, but that isn’t the rule. You can make payments more often than once per month, and once you reach your minimum for the month, additional funds are credited towards future month payments.

When I graduated and didn’t have to save for tuition anymore, I started putting those funds right into my student loans. I paid the minimum on each loan and then any extra funds into the loan with the lowest balance – all of my loans had the same 6.8% fixed interest rate, so there was no financial benefit in paying one compared to another. Paying the smallest loans first, it gave me a big psychological win each time I finished paying another loan. I realized that my paycheck came every other week, not once a month, so I decided to pay my student loans on my payday schedule.

So I paid half of my minimum payment automatically every payday with autopay, which gave me a .25% interest rate reduction and guaranteed I would never be late or miss a payment. Being paid every other week, I had 26 paydays each year. That is two more than the 24 that would add up to 12 monthly payments per year. That meant I was making a full extra monthly payment each year, which helped me get my loans paid off faster.

Because I was paying my loans twice per month, I only had 14 days of interest accumulate at a time instead of 28-31 days, which also saved a few bucks on interest every month. Paying the two extra payments each year also lowered the outstanding balance that was accumulating interest, saving me even more.

Editor’s Note: One way I’m making extra debt payments is with Qoins. Qoins will help you pay down debt faster by applying an extra payment for you using your spare change. Qoins rounds up what you spend to the nearest dollar and sets aside that amount to be applied towards your debt.

Because I took few deductions, I got a fat tax refund back each year. I would rather be conservative with my payroll withholdings and get a refund than risk owing on tax day, so I usually got back around $2,000-$3,000 while paying my student loans.

When my tax refund direct deposit arrived in my checking, I made a payment for the exact amount towards my student loans. As a Financial Analyst, I also received an annual bonus from work each February or March. Again, the day it arrived in my bank account, I made a student loan payment for the same amount. Combined, putting my bonuses and tax refunds into my loans made big leaps forward on my path to debt freedom.

Thanks again to that super low budget, I typically ended up with at least $500 extra at the end of the month. While my student loan minimum payment was around $250, I decided to pay extra to get out of debt faster. I started by increasing my payment each payday by $10. Then $50, then $100, and more until I was paying about $700 per month into my student loans each month.

If I had extra cash accumulating in my bank account, I would make one-time payments. I just keep chipping away at what was left. I started my personal finance blog, Personal Profitability, a couple of years before and was making a small income from it. Every side hustle dollar went to my student loans too.

That brings us back to March 22, 2012. I was down to my final student loan, which had a balance that just went under the $4,000 mark. I knew the payoff was in sight. On that fateful Thursday, I had just received my annual bonus from work. It would be a little bit of a stretch, but my checking account balance surpassed my student loan balance. I decided it was time for the big payoff.

I opened up the Great Lakes student loan website, entered a one-time payment for $3,690.52, and clicked the confirm button. Poof! My student loans were paid off. You Can Do It Too! I would like to think that I’m the smartest and best-looking guy in town, but honestly, I know that’s not true, at least for the smartest part. ” />

Here’s what made me special compared to millions of other student loan borrowers:

If you can even do half of what’s on that list, you’ll be in better shape than most. It’s time to stop thinking and reading about getting out of debt and taking action. That’s the only way it will happen.

So what are you waiting for? What’s holding you back? Let us know in the comments!

46shares
This site uses cookies. Some of these cookies are essential, while others help us to improve your experience by providing insights into how the site is being used. For more detailed information on the cookies we use, please check our Privacy Policy.OkPrivacy policy