Why You Need to Get Realistic About Paying Off Your Debt 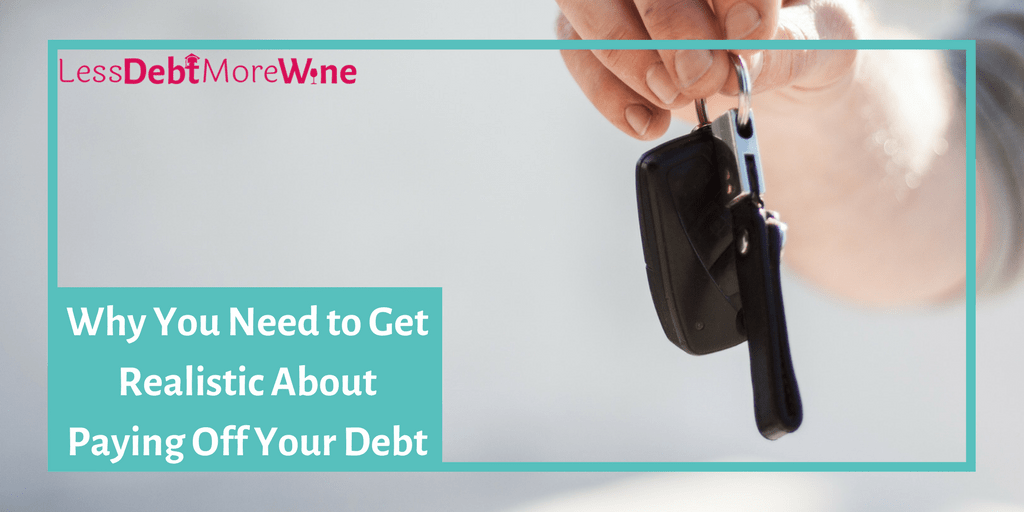 I’m sure you, like me, can come up with debt repayment plans all day long. Well if I pay this much per month I’ll be debt-free by around this date. But then reality sets in, that I can’t actually pay that much each month.

Throw in some curveballs from life and next thing you know you’re way off track on your debt repayment plan. Worse, you start to lose sight of your goal. I know the feeling, I’ve been there.

You can’t move forward or reach your goal unless you get back on track and to do that you need to get realistic about paying off your debt.

Something Threw You Off Your Debt Repayment

For me, that thing was my move in March/April 2015 which made me push pause on my financial goals and even when I thought I’d get back into the swing of things, I didn’t.

It’s not to say I didn’t make progress or paid more than the minimum, but I didn’t make as much progress as I could have and it left me feeling a little defeated.

So I went through all of my spending for the year to get a look at my big picture spending so I could prepare to kick some debt repayment ass in 2016.

Looking Back at Financial Data Helps You Make Better Decisions

After looking at all my spending, I estimated the amount of money I would need for travel so I could better save for it throughout the year, and decided where I was going to make some cuts so I could move closer to my goal to pay off my car.

I then calculated a few different numbers. First, how much I could afford to put towards my car. That number would have my car paid off in early 2017. Not good enough.

Paying my car off in Dec. 2016 assumes a few things. First, that I will continue to be employed as I am now (since they just did the annual reorganization and I survived, I’m assuming I’ll have this job for at least another year.) Second, that my income won’t change (the new CEO is cheap, and I’m not expecting a raise). Third, that all of my other bills (rent, minimum student loan payments, insurance, etc.) will stay about the same.

Any or all of these things can change. In fact, all of them changed in 2015 (I stayed with my same employer but moved roles).

Having a specific number each month and a date in mind keeps it simple. It motivates me to make sure I can reach at least that number every month.

Update: As of Nov. 2016 most of these things have changed. I moved and incurred higher rent, but I’m glad to pay for security and peace of mind (there was a murder around the corner of my old place). I’m also headed towards self-employment very quickly and focused more on saving than paying off debt. Even so, I’ve managed to pay more than the minimum throughout the last year. Unfortunately, this means I won’t reach my goal of having my car paid off in Dec. 2016.

Every Purchase, is an Opportunity to Ask, Is it Worth Being in Debt that Much Longer?

With the holidays approaching, there is a lot of temptation with good shows and gifts. I just keep asking myself is it worth being in debt that much longer? Right now my answer is no. It could change later (it will take years for me to be debt-free, I’m going to go to a show occasionally), but all I want right now is to be done paying for my car.

I’ve refocused on my debt repayment and gotten realistic about my most immediate goal. So now, I’m once again excited to see just how quickly I can kill that car loan.

Related: How Qoins Can Help You Pay Off Debt Faster

No matter what threw you off your debt repayment, be it a curveball from life or just an unrealistic expectation, if you want to pay off your debt you have to get realistic.

Take the time to evaluate what threw you in the first place. Then review your finances, your spending and your income. Finally, come up with a realistic plan and start kicking ass.

What about you, have you ever lost focus on a goal?

47shares
This site uses cookies. Some of these cookies are essential, while others help us to improve your experience by providing insights into how the site is being used. For more detailed information on the cookies we use, please check our Privacy Policy.OkPrivacy policy