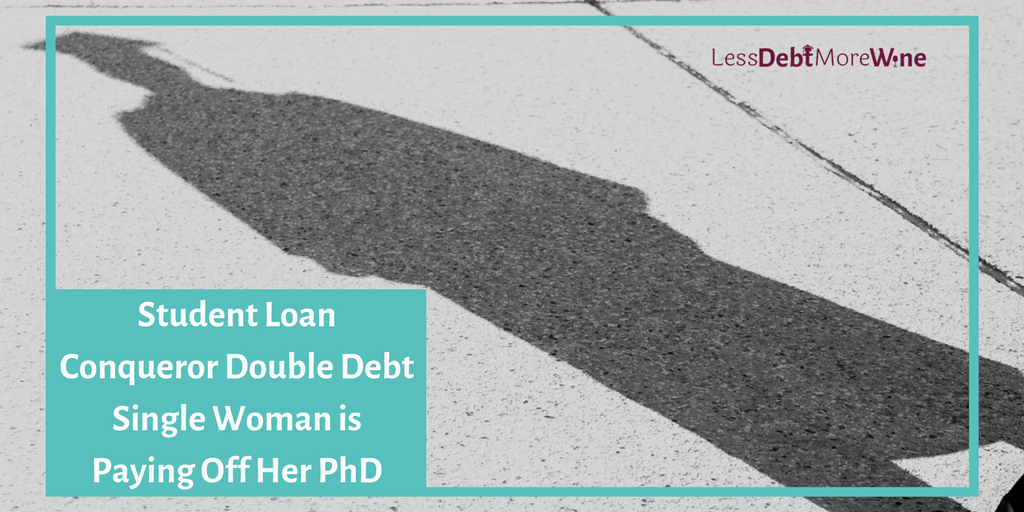 Today, I’m thrilled to have Denise from Double Debt Single Woman. Denise is a 40-something single woman living on the West Coast who is paying off over $140,000 of debt. In 2013, she embarked on a path of extreme saving and minimalism to take control of her finances, chronicling everything at her blog, Double Debt Single Woman. She currently lives on roughly 25% of her take home pay, while the other 75% goes toward debt payoff and savings. Now onto the interview!

When did you graduate and with what degree?

What was the maximum amount of student loans you owed and where do you stand now?

(editor’s note, doing the math, Denise has paid off over $37k in debt)

When did you start to focus on your student loans and what motivated you to do so?

In late 2012, my student loans came out of forbearance. I’d had them in forbearance while I tried my best to forget that they existed. And I did forget. I was running errands one day in town when I got a phone call from my student loan servicer informing me that I was late with a payment. Alarmed, I raced home, a pricey downtown studio apartment that I had at the time, to figure out the damage.

I did the math and reality crashed down on me. How could I have been so ignorant?! There was no way that I could afford to pay this. I also had $30,000 in credit card debt that I had accumulated over the years during periods of underemployment and unemployment. There was no way I could pay the student loan payment, my monthly credit card payment, and my rent. Something had to give.

I regretted the debt and was angry with myself for ending up in this situation. In January of 2013, I moved out of my apartment and rented a cheap room. I accepted that my life was going to change drastically for the next several years. A few months after moving, I was let go (fired) from my job. The uncertainty and fear of having that much debt and now no job made me stressed and depressed. The anger and frustration motivated me to attack and kill all of the debt, the source of my problems, once and for all. In 2013, became a graduate student of personal finance.

What is the one action you’ve taken that has made the biggest difference in your finances?

Wow, it’s hard to pick just one, but I’d say broadening my horizons. After I lost my job, I was frantically looking for work anywhere within my field. It led me to move to a higher cost-of-living area in another state, which offered higher average salaries than the small city I had been living in. I kept my living expenses low by living with roommates and not having a car. The higher salary and low expenses helped me gain traction to pay down the debt.

What is the best piece of financial advice you’ve received?

“Don’t Take Money Advice from Companies That Profit When You Fail”. This is a title of a personal finance post from Lifehacker’s Kristin Wong. It sums up a lot of lessons I’ve learned along the way.

What is one piece of advice you would give to others paying down student loans?

Don’t get comfortable with your student loan debt. Pay off ALL debt as quickly as possible. Having debt puts a leash on us. It takes choice away from us. Debt makes us feel trapped in jobs and/or relationships. Get rid of the debt and you will have more options in life.

For me, the difference between a poor life and a good life is how many options I have. Each option we keep on our table is another degree of freedom. I want the freedom to leave a job if it becomes toxic, or to not have a job at all if retiring early is a goal. Debt is not normal. Ditch it!

If you could do it all over again, would you? Why or why not?

I would have made different decisions, for sure. I wouldn’t have stayed in school so long (opportunity cost). Also, I would have chosen a different field of study at other institutions. I wouldn’t have incurred this debt in the first place. If I could go back in time, knowing then what I know now, I’d be laying the groundwork to retire early and avoid debt like the plague.

Are you actually utilizing your degree? If not, why not?

Yes and no. The degree that I’m using in my field is a master’s degree that I earned in a different discipline from my Ph.D. So I’m using one of my degrees, but a Ph.D. is not necessary at all for what I do now.

I just celebrated crossing over into positive net worth territory for the first time in my adult life. I wrote about it here. I’m a (net worth) ‘Zero’, and I’m happy as a clam about it. Celebrate your milestones with us over at DoubleDebtSingleWoman.

Thank you, Denise! I appreciate you being a part of Student Loan Conqueror Series. Good luck with the rest of your journey to debt freedom (I’ll see you there one day!).

16
This site uses cookies. Some of these cookies are essential, while others help us to improve your experience by providing insights into how the site is being used. For more detailed information on the cookies we use, please check our Privacy Policy.OkPrivacy policy