How to Cut Costs Without Cutting Too Deep 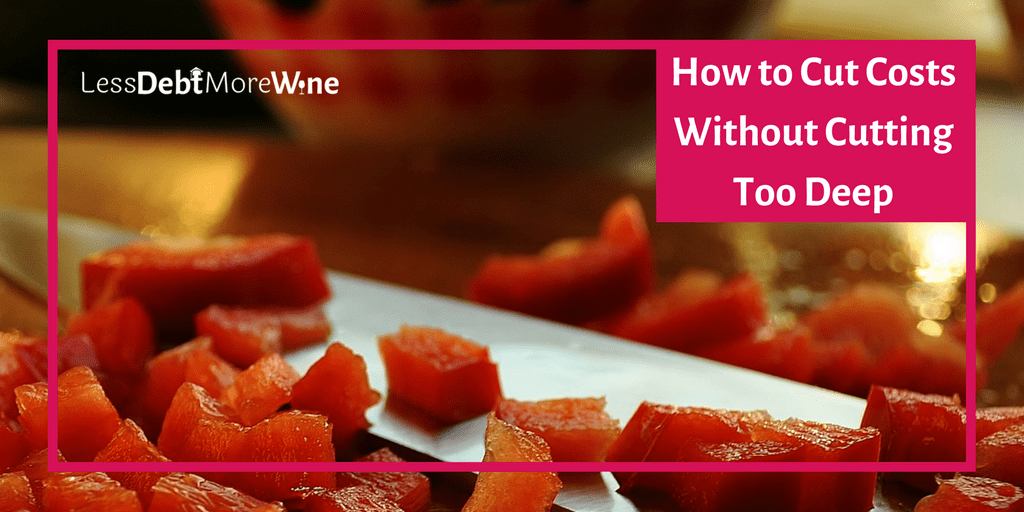 When I first started learning to budget, I would try to cut a lot of costs so that I could put more money towards my credit card debt. The problem was I was cutting my expenses too much and would end up using the credit cards I was trying to pay off to pay for other things. It was a vicious cycle.

After a lot of trial and error, and some perspective from my former job where I saw businesses cutting costs constantly only to have to rebuy what they had cut I finally figured out how to cut costs, without cutting too deep.

Cutting Costs without Thinking Ahead

One of the biggest ways I would see businesses cutting cost is by getting rid of print subscriptions since most everything was online. They would often take an ax to it all and while I admire that sort of determination, not everything was available online and as a result, they would cut cost too deep.

These subscriptions (think encyclopedic series subscriptions) can cost tens of thousands of dollars a year. Many times it is information that is available online. However, since not everything was online, these businesses were essentially losing their entire investment into the series. So that if or when needed it again, it would cost a lot more to replace than it would have to just keep up the previous subscription.

The point is before you go cutting expenses you need to really evaluate if it is something you need now or if you may need it in the future. Is it feasible to pay for it again in the future if you cut it now? Or will it cost even more to start later, than it would be to just keep it going?

For example, it’s easy to cut cable, but if it is something you love, will you be miserable without it how long before you start it up again and how much will it cost when you do? You may choose to cut cable and go with a less expensive option like Hulu or Netflix so you are still saving money but not doing totally without.

On the other hand, while you may think it’s a great idea to cut out the cost of oil changes or wait longer between them, you have to realize this could cause other problems with your car down the road. You have to decide if the potential cost of some car trouble later is worth skipping the oil change now.

When How You Cut Costs Impacts Paying Off Debt

On a personal finance level, I am trying to throw everything I have at my debt. But sometimes I’ve thrown too much. This has, in turn, resulted in one week’s grocery shopping being put on the credit card I’m working to pay off.

Now, this is more the exception than the rule, but you can see how cutting too deep regularly can start a vicious cycle. Where you pay down debt only to then increase the debt too, so on and so forth. It becomes a two-steps forward, one step back approach. Taking you a heck of a lot longer to get where you want to go.

To prevent this problem, I found it is best to have a buffer. You can throw everything you have at your debt and still set aside some for any unexpected expenses. It doesn’t have to be a lot each month either.

A buffer is just a cushion. I’ve learned that it is important to have a nice cushion in my budget for unexpected expenses that pop up from time to time. If that starts to become a struggle, I use a trick to keep on track. See I look at what I want to put towards my debt and instead just put 95% of it towards my debt and save 5% for the cushion/buffer.

I found setting aside that small percentage works for me, but I realize it can be tough and doesn’t work for everyone. Another tool I use to help me find “extra money” to set aside is Chime.

If setting aside a percentage is hard, try using a tool like Chime

Chime is a great savings option that will automatically save for you and give you a double savings bonus the first two months. All the small transfers (could be less than a dollar) really add up. You could easily use this as a buffer account. Check out Chime to learn more.

Finding the balance between cutting cost and not overdoing it can be tough. But by taking the time to evaluate both short-term and long-term costs and having a buffer, you’ll have some room to breathe even if you do over do it a little bit.

What about you? Have you ever run into the problem of putting a little too much toward your debt? Let me know in the comments!

341shares
This site uses cookies. Some of these cookies are essential, while others help us to improve your experience by providing insights into how the site is being used. For more detailed information on the cookies we use, please check our Privacy Policy.OkPrivacy policy