How to Get Out of Neutral & Take Action by Re-organizing 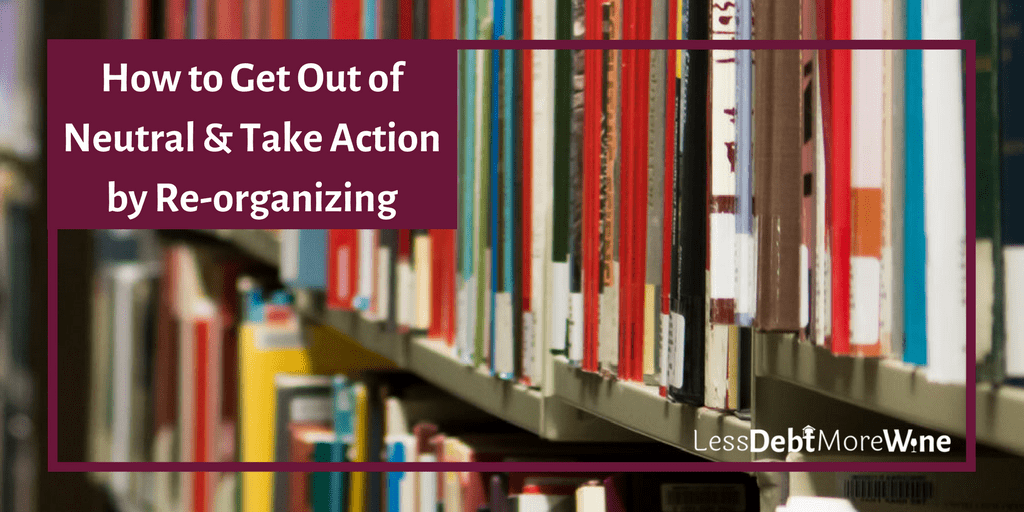 After reading brokeGirlrich‘s post on being stuck in neutral, I started thinking about all the ways in my life lately where I’ve felt stuck.

I’ve had this I’m stuck feeling a lot lately and I think everyone does sometimes. It does not matter if you have debt or not. Once you are stuck it is hard to shift into gears, to find that extra motivation, a little oomph to kickstart your progress.

Lately, my answer for getting out of neutral has been to re-organize. Re-organizing has multiple advantages. First, it forces you to view your problem in a different perspective. Second, it gets you moving, it’s that first step. Third, once you have finished re-organizing, you feel like you actually accomplished something. The result of re-organizing usually leads to a next step you can take.

Here are just a few examples of where I’ve been stuck lately and how I have/am working to get out of neutral by re-organizing.

For a long time, I just sort of figured I was stuck with my debt. I’d taken out the student loans and that’s the way life was gonna be for the next 25 years. Staring down 25 years of debt payments for a fancy piece of paper is demoralizing, to say the least.

I felt stuck and chose to ignore it, besides I have credit card debt that I should deal with first anyway. So little by little I worked on paying off my credit card debt. I knew the credit card debt was there and an approximate idea of how much it was in total. Though I never really looking at the actual total. I just knew it was going down at a painfully slow rate.

How I Shifted Gears:

I took a good long hard look at the numbers. All of the numbers, not just the totals. I wrote down every single debt. Including credit cards, car loans, and student loans, their interests rates, and how much the interest was costing me on a daily basis.

Those numbers were not only jaw-dropping and depressing, but they were also eye-opening. It was the right kick to start putting my credit card payoff plan in high gear.

In the last three months, I’ve thrown $2,663.92 towards my credit card debt. This is compared to the $682 I had paid the three months prior, that’s almost 4 times as much!

At this point, my goal is to have all my credit cards paid off by the end of the year. It is a stretch, but not impossible. After getting things organized, which included determining the order I would pay things off, I started this blog to help hold myself accountable.

Feeling Cramped in My Apartment

When I first moved to the east coast, all of my stuff fit into one car. My last move involved I don’t know how many car loads and borrowing a friend’s truck to move furniture that wouldn’t fit into my car. I’d had everything in a storage unit for about a year and in fact had forgotten about a lot of stuff. There was a lot of chaos moving.

Fast forward a little over a year of being in my apartment. I was constantly reorganizing my stuff to try and make it fit better, but things always ended up cluttered looking. Causing me more stress. Slowly I started downsizing, but being the impatient person that I am, it was again a painfully slow process and I kept feeling stuck.

How I shifted Gears:

My roommates moved out, which meant I had twice as much space! Just kidding, I didn’t just space out my stuff. While it was true my roommates had moved out, I was getting another one at the end of summer.

So it meant I had two months of having the apartment to myself. I took full advantage of those two months. I used the space to spread out all my stuff so I could actually see it. Then I began the process of throwing away, selling, or donating.

I downsized the amount of stuff I have which made it much easier to know what I had and to organize it. This meant no more going out to buy deodorant because I didn’t realize I already had a spare one.

Along the way I also DIY’d quite a bit, repurposing/upcycling things I had, to create something I could actually use.

For example, I had tons of t-shirts that had some sort of sentimental value. I didn’t want to get rid of them but I also was never going to wear them again. So being the good little DIYer that I am, I made myself a quilt out of the t-shirts. Living in New England, I’m a firm believer in the idea that there is no such thing as having too many blankets.

In the end, without furniture, I could fit all of my stuff into 1 car load, maybe 1.5. Even better, I now feel like I live in an environment where I can breathe. Making it easier to focus and get work done. Cheers to minimalism!

Stuck in My Style & Surroundings

I’ve started to notice how little color is in my wardrobe and I’ve been a little disappointed by this fact. But the way things are, I’ve been in major frugal mode. In addition, a bad birthday made me realize I hadn’t surrounded myself with the greatest people. I realized that I had good friends, just not great ones.

I decided I wanted to start making bold moves to really live the life I wanted. As easy as that decision is to make, following through when you’re on a budget is hard.

How I Shifted Gears:

I shopped my closet. Yes, I had gone through all my clothes when I was cleaning out my apartment over the summer, but I hadn’t looked at my fall/winter wardrobe. Turns out I had a nice brightly colored scarf, but not much else. From there I made a list of things I wanted to change up my wardrobe. I didn’t want to spend money replacing an entire wardrobe. So I came up with a defined list of things I was allowed to get.

So far I’ve managed to score a draped sweater for $15 and some colored jeans for $25. Technically this is a splurge as it isn’t absolutely necessary for my survival. But it’s not breaking the bank and getting out of this funk is good for my mental health.

A new look isn’t always about clothes, a haircut can make a big difference

Another way I’m changing my look without having to adjust my budget, my hair. I get my hair cut/colored 4 times a year, at my next appointment I’m going for a drastically different look. Since it is in the budget I’m not spending any extra money to make the change. It just required a little patience not to move up the appointment.

As for surrounding myself with better people? I cleaned out my contacts on my phone. I figure if they actually reach out to text me, I’ll say I lost my contacts and go from there. I’m done reaching out to those that don’t do the same.

Letting go has been surprisingly uplifting, seems like those bad relationships were weighing me down. Overall, life is pretty good these days. I think the changes I’m making are only going to make it better 🙂

Re-organizing or organizing for the first time is a great first step to take when you get stuck and will help you figure out your next step. In my examples above here is how it helped:

So if you are feeling stuck, take the time to get yourself organized, it will make know what the next step is easy and make actually taking that next step easier.

What about you? What do you do to get out of a rut?

62shares
This site uses cookies. Some of these cookies are essential, while others help us to improve your experience by providing insights into how the site is being used. For more detailed information on the cookies we use, please check our Privacy Policy.OkPrivacy policy