How You Can Lower Your Tax Bill By Donating Your Crap 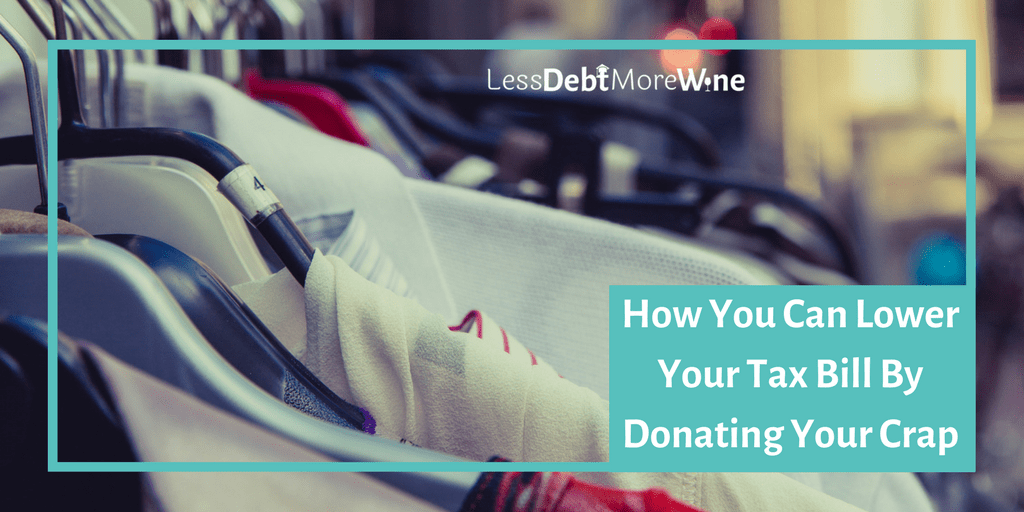 Hopefully, you’ve done some spring cleaning this month. If so you’ve probably made a few bucks selling some of your old junk, but chances are you still haven’t sold everything. Rather than keeping a pile of stuff around just go ahead and donate it.

I know what you are thinking how can you take advantage of donating your stuff? Well in the alternative you could put it curbside with a “FREE” sign, or give it to someone’s kid or a friend who is just getting their first place (If they specifically ask if you have anything then ok, maybe give it to them). The selfish option is to donate your stuff it for the tax benefit.

What is the Tax Benefit for Donations?

Charitable donations qualify as a deduction on your taxes. You can generally reduce your tax bill a $0.25 for every dollar you donate. The Simple Dollar does a great job of walking you through the math in this post. So for example, in 2015 I donated $1500 worth of items to charities, saving me approximately $375 dollars in taxes.

Now if I would have kept those items instead of donating them and taken the time to sell them I would likely have made more than $375. However, it also would have required a lot more of my time. Time, I didn’t have because I was moving out of state.

Donating took significantly less time and effort. A couple of donations involved me driving to my chosen charity and dropping off the stuff. The biggest donation was picked up by the charity themselves, all I had to do was call. It doesn’t get easier than a phone call.

How to Make Sure You Get the Deduction

First, always get the receipt from the charity showing you donated.

Second, make an itemized list of everything you donated. I like to staple the two lists together and then file them away in a folder marked for that year’s taxes. When tax time comes, I itemize (list everything you donated) the deduction, there is a cool tool that lets you look up the value of each item and totals it up for you. Voila, you’re done.

The biggest mistake you can make when trying to get a tax deduction for your donations is to not keep a detailed list of the items you donated. The next biggest mistake would be to not donate to a legitimate charity and to forget to get the receipt for donating. Take the time to keep track of what you are donating and it will pay off come tax time.

Do you like to sell or donate your stuff? Let me know in the comments!

116shares
This site uses cookies. Some of these cookies are essential, while others help us to improve your experience by providing insights into how the site is being used. For more detailed information on the cookies we use, please check our Privacy Policy.OkPrivacy policy