The Best Reasons to Rent Instead of Buy 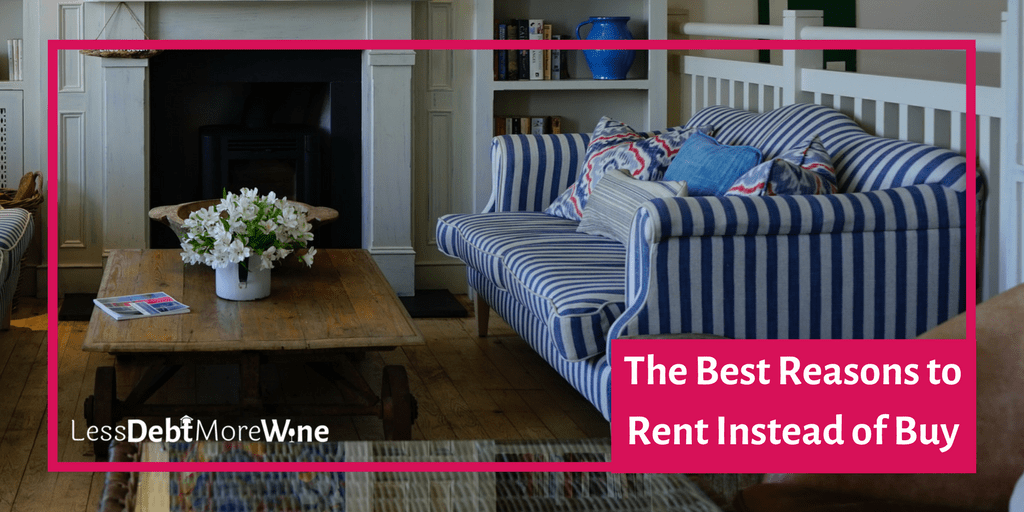 Updated: March 25, 2017 So there are many arguments for and against renting vs. owning property. Personally, I have never owned any real estate, and while I recognize that it is great for some folks, it isn’t for me, at least not yet.

Why? For two big reasons. First, I don’t know where I’m physically going to be in a year, much less four or five. Second, there is a lot more costs involved in owning a home than renting one.

Why Renting Can be Better than Owning

While I do want to own a home someday, I am in no way ready to own a home and love the flexibility that renting allows. I also love that I don’t have to do any of the repairs or fixes for my apartment. Yup, I just call maintenance and they will come change a light bulb.

Freedom and Flexibility to move

Just six weeks after originally writing this post, I moved from Massachusetts to North Carolina. A year into living in North Carolina I moved across town to a different apartment complex. Because I rent I have the freedom and flexibility to move pretty much whenever I want.

Sure there are lease terms, but even then for the right price, in my case two months rent, you can break your lease. If you owned a house you would have to wait to sell your house before moving. It is a much longer and more complicated process.

Not to mention if you want to make a profit off of your investment of owning a home you usually need to live there for a minimum of 3-5 years.

Owning a home means you are responsible for any necessary repairs, snow removal etc. I have lived in my current apartment for two years, but in the last six weeks, there have been three instances that made me very glad that I rent. Had I owned the property I would likely be paying a mortgage and for all the repairs.

A circuit blew, resulting in half of the outlets and some of the lights not working. While this was a pretty big inconvenience, especially since I was sick at the time, I was not responsible for the bill.

It took my landlady a week and three different electricians to figure out what was wrong and fix it. I never realized how handy it is to have an overhead room light until it no longer worked.

It has snowed. A-lot. I live in the Boston area, in case you haven’t seen the news lately, we’ve had a ridiculous amount of snow in the last month. However, I am not responsible for clearing the snow. While I will shovel to get my car out and clear a path for the mailman, I don’t do the sidewalks.

I figure I’m not the one that will get sued if someone slips in front of the house. Also, the downstairs neighbor never does anything and gets to profit from my shoveling. Thus, they can be the tenant responsible for not clearing the sidewalks.

The thermostat was set at 60 but for some reason, the heat kept running, it ended up being about 72 degrees before we just went ahead and turned off the system. We certainly didn’t want all the oil we just bought being burned up super quickly, because it wasn’t working properly. They ultimately did not have to replace the thermostat as the problem was with the boiler.

However, had they changed the thermostat it would have cost somewhere in the vicinity of $150. However, this $150 would be coming out of our landlady’s pocket, not my roommate’s and mine.

If you don’t like the idea of committing to live somewhere for a minimum of 3-5 years then you should stick to renting. Additionally, if you are looking at mortgage calculators and can barely afford the mortgage, then chances are you can’t really afford to buy a house.

Renting is better because of your ability to move from year to year and you aren’t responsible for the costs related to the maintenance and upkeep of your of your home.

Overall, I’ve had some issues with my old apartment and occasionally with my current one (though none as bad) I’m glad I rent. I haven’t had to pay for any of the service visits or repairs, and I’ve had incredibly nice landlords that have gotten things taken care of quickly. So when it comes to renting vs. owning debate, I remain solidly on the renting side.

86shares
This site uses cookies. Some of these cookies are essential, while others help us to improve your experience by providing insights into how the site is being used. For more detailed information on the cookies we use, please check our Privacy Policy.OkPrivacy policy