Money is More Than Just Numbers 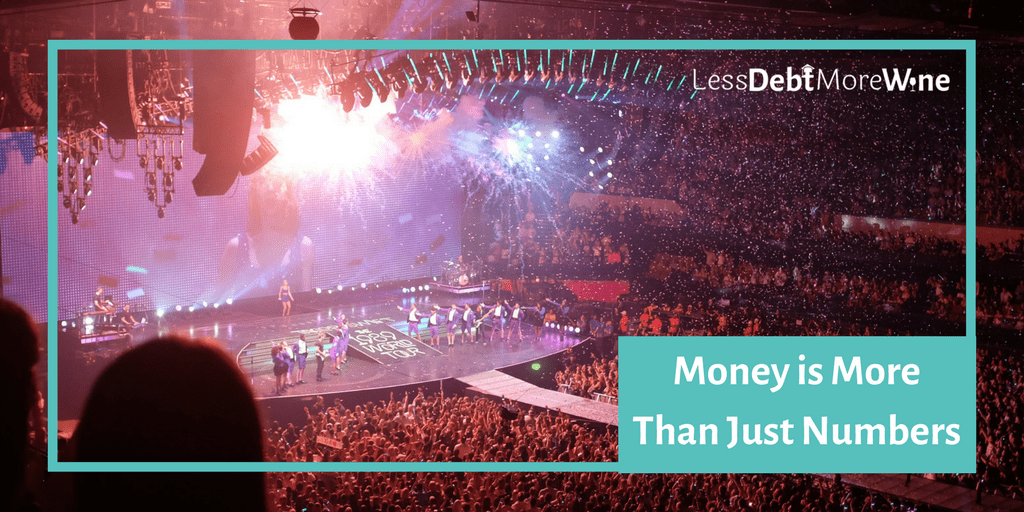 Money is more than just the numbers in your checking, savings, or retirement account.

It’s more than the numbers on your loan balance statement.

Money means, more or less, to each person, depending on their situation.

A person with plenty of money probably doesn’t think about money as much as a person with tons of debt.

It’s important to realize we don’t all think about money the same way so that we can be sensitive to those who are struggling with money. One of my favorite all-time personal finance posts is Disease Called Debt’s How to Be a Better Friend to Someone in Debt.

Today I’m still in debt, but I’ve actually got a decent handle on my finances, I pay my bills a month ahead and have an emergency fund. But not quite 4 years ago that wasn’t the case. I had quit my two retail jobs to move back across the country and had yet to land a job. I was staying on very generous friend’s couches.

Money was extremely tight. I was selling my stuff to make ends meet and eventually ended up borrowing some cash from my parents to stay afloat. I finally got a temporary gig that helped make ends meet, but I still didn’t have a place to live. It was a very difficult 4 months and I’m eternally grateful to the friends that helped me through it.

I Lost a Friend Over Her Judgment on My “Spending”

Unfortunately, I also lost a friend during this time due to my money woes and her judgment. I was living in the Boston area and a friend was getting married in New York. I had maybe $20 in the bank. This friend offered to drive and we even had a free place to stay, the problem was not only could I not afford to pitch in for gas, I couldn’t afford to pay for food. I tried selling stuff all week in order to get money to go, but it just didn’t happen.

I won some concert tickets

About a month and a half later I won tickets on the radio to go see one of my favorite bands. I was so excited because I had no money to see them otherwise. Even the night of the show I drove around for almost an hour until I found a free parking spot since I couldn’t afford to pay $25 to park.

I put up a tweet saying how excited I was to see the show. Later, I saw a tweet from my now former friend commenting how someone could afford a concert ticket but not afford to go to a friend’s wedding.

Ask before you judge or just don’t judge

I was hurt, hurt that she would assume I would ever prioritize a concert over a wedding. Hurt, that she didn’t even have the courtesy to talk to me about it before posting something. I called her in tears, she didn’t answer. I left a message explaining.

I don’t’ know if she ever bothered to listen to it, we stopped being friends after that. Of course, a friend that would think so little of me was probably never a very good friend anyway, but it still hurt.

The woman whose wedding I missed totally understood and was so happy for me that I had got to go to that concert since she knew how much I loved music. The other woman and I, each lost a friend because of a simple misunderstanding and judgment over money.

She had the money to go to the wedding and was offering to take me too. She couldn’t understand why I just couldn’t make it work. I couldn’t bring myself to tell her I couldn’t pay for eating out.

The point is, money isn’t just numbers. How important it is to someone and what it means to them and what they are able to do is going to vary depending on their situation.

What Money Means When You Have Money

When you have money, you view both life and money differently.

You View Money as Choices

When you actually have money, you tend to view money as providing you with choices. Like the choice of, do I go to a couple different stores to get the best price on everything or do I pay the convenience cost of getting everything at Target?

Should I eat out this week or cook at home?

Do I buy store brand or name brand?

It’s all a choice, money means choices, choices that aren’t available to those whose money is super tight.

Money Provides You Peace of Mind

Knowing you have money in the bank gives you peace of mind. Knowing that if any number of situations were to come up, you’d be ok.  If you got in a car accident, you know you could afford the deductible. Or if you lost your job, you’d be ok while you looked for another one.

If something terrible happened to a friend or family member, you could afford to be there without a second of hesitation. All of these possibilities are sources of stress for those without money. For example, if you have an emergency fund, that money means peace of mind.

You View Money as  Tool

When you have it, money is a tool to help you reach your goals. It could be reaching financial independence, becoming a homeowner, paying for school to help you in your career. The number of ways you are able to use money to help better your life are endless. Money means tools to improve your life in some way.

What Money Means When You Don’t Have Money

It is one thing to barely make ends meet, it is another to have all your living expenses covered and still be unable to make ends meet. When I moved back to the east coast, some friends didn’t understand what costs I could possibly have if I was staying with other friends. They failed to think about how they too spent money on things besides housing and mortgage payments.

I needed money to make my minimum loan payments, to put gas in my car, to pay for my storage unit that held all my worldly possessions. I had to pay for my phone and my auto insurance. Even if you are living rent free, it doesn’t mean you don’t have other bills. Then to pile debt on top of that when you are struggling to find a job, it is very hard. The debt can seem suffocating.

Knowing that if you got into a car accident or even just went over on a metered parking space, you couldn’t afford the consequences. Think about that, when money is so tight for someone that they literally cannot afford to be 5 minutes late to pay the parking meter.

Pretty much everything in day to day life is associated with money in some way. Therefore, everything is in some way causing someone without money stress.

I remember one time during the end of that four-month period where I was the most broke I’d ever been. Had my parents not been kind enough to deposit a couple hundred dollars into my account, I would not have been able to get my car out of the parking garage. I had spent my last $3.72 on gas to get to a job fair that day.

Either Way, Be Mindful of Others and Don’t Judge if You Don’t Know the Whole Story

By the way, unless you are a contributing member of their household expenses and income, you don’t know the whole story. No matter how much a person shares about their money situation, you will never know everything.

Instead, be an ear to listen to for the friend with financial woes. Be an enthusiastic cheerleader for the friend doing something great with their money.

Always be mindful that just because you are drowning in debt doesn’t mean your friends are too. Be happy for their money accomplishments and use it as motivation for your own.

If you have money, be sensitive to your friend without and don’t constantly suggest activities that cost money or don’t be offended if they can’t come.

Have you ever lost a friend due to money? Tell me about it in the comments!

6 thoughts on “Money is More Than Just Numbers”

48shares
This site uses cookies. Some of these cookies are essential, while others help us to improve your experience by providing insights into how the site is being used. For more detailed information on the cookies we use, please check our Privacy Policy.OkPrivacy policy