How Smart People End Up Crushed by Debt 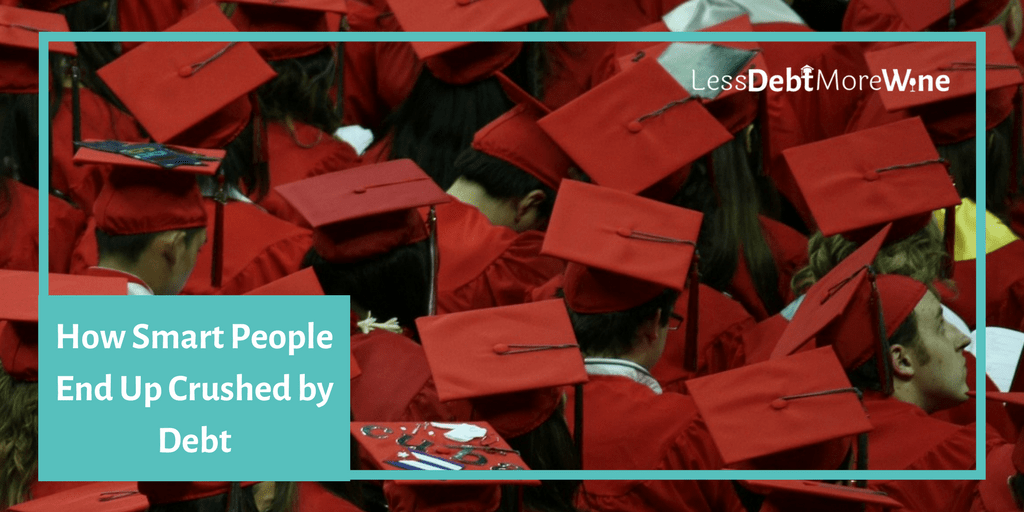 I said I was a lawyer and had over $200k of student loan debt, every one of them had more student loan debt than me. One had $490k debt. I’ll admit this made me feel slightly better about my loan amount. Though with their current careers, they were planning to qualify for public service loan forgiveness. I hope they do.

What is my point? Arguably, doctors and lawyers, are smart people, both law school, and medical school are really hard, but we all ended up with crushing amounts of debt. While we enlist in income-driven repayment plans and pursue various loan forgiveness programs, there is no guarantee that those programs will still exist by the time we get to the end of the repayment plan.

How Our Other Goals are Crushed by Debt

Those of us with graduate degrees likely have student loan debt far exceeding the average $37k college grads have today. We worked really hard to get where we are but it seems no matter how hard we work there are some other financial goals that just seem to stay out of reach.

Honestly, I go back and forth on whether I hope to own a house someday or not. That thought process was always based on the responsibility and commitment required when owning a home. However, due to the high amount of student loan debt I have and my current income level even with a decent down payment I likely wouldn’t qualify for a mortgage. So it looks like I will continue to rent for the foreseeable future.

Why Would Such Smart People Take on So Much Debt

Growing up, I think a lot of us were taught that college was the minimum expectation of educational achievement. By the time we got to college, to really get a step up, you needed to get a graduate degree. This was all working just fine, until the recession.

Interest rates were high, student loans were large, and jobs were scarce. Not to mention, the starting salary after we did graduate was extremely low. This lead to a scarcity mindset, it is still something I battle with constantly. Things aren’t as bad now, but when I graduated I was shit out of luck and it is my constant worst case scenario worry.

Even for those that graduated a little later than I did, they may have known that the graduate degrees didn’t have the best return on their investment but jobs were hard to find with just a college degree. There is a large group of us (I’d say college classes 2008-2010 and graduate classes 2010-2011) that got painted into a corner. We were screwed either way.

How Things Can Get Better

First, at least for me, I need to make more money. Beyond that, the most helpful thing would be an ability to refinance my loans and still be able to opt into income-driven repayment plans. This is something that has been proposed to congress but currently, has had very little traction. Lastly, I’d like to propose that at least 50% of all payments go towards the principle.

Under current income-driven repayment plans, if your payment doesn’t at least cover the interest, you don’t touch the principle. So you could be making payments for years exclusively on the interest and yet the interest just continues to grow. It’s like chasing your tail without any hope of catching it. Frankly, it sucks.

So while I hope we see changes in the student loan world and particularly with federal loans. Only time will tell. In the meantime, if you too are a smart person being crushed by debt, know you aren’t alone. While debt may lead to fewer options, there are always options. We’ll get through this together, ok? Do what you can to cut expenses and make more money to pay down debt. But try not to completely forgo other financial goals, especially savings goals.

Here’s hoping for some student loan reform and soon! What do you think should happen?

2 thoughts on “How Smart People End Up Crushed by Debt”

154shares
This site uses cookies. Some of these cookies are essential, while others help us to improve your experience by providing insights into how the site is being used. For more detailed information on the cookies we use, please check our Privacy Policy.OkPrivacy policy